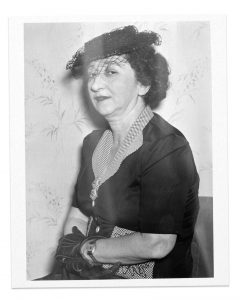 Rose Mackenberg may have been the best “ghost buster” ever.

She was employed by Harry Houdini to search out frauds at séances — she did so, frequently in disguise, with amazing skill.

In her personal life, she preferred to keep her own apartment very well lighted.  She died at the age of 52 in 1926.

This article is part of Overlooked, a series of obituaries about remarkable people whose deaths, beginning in 1851, went unreported in The Times.

Spiritualism, the religious movement centered on the belief that the spirit survives earthly death and can communicate with the living, was at its peak in the early 20th century; its most famous advocate was probably Arthur Conan Doyle, the creator of Sherlock Holmes.

With that movement came thousands of phony psychics claiming to be mediums who could connect people with their dead loved ones.

Harry Houdini, the renowned illusionist and escape artist, attended hundreds of séances, trying to communicate with his dead parents, before deciding that many self-described seers were in fact con artists soaking the gullible.

He hinted at having occult powers of his own, but ultimately declared that his stage act was “merely a matter of a sleight of hand,” as Christopher Sandford related in his book “Masters of Mystery” (2011).

By 1924, however, Houdini wasn’t content with renouncing any claim to having mystical abilities of his own. That year he published “A Magician Among the Spirits,” a book in which he debunked some of the effects that mediums produced, like wobbling tables and floating objects. “Whenever any of these alleged spiritual mediums tell you that they have supernatural aid,” he told a reporter at the time, “you may safely set them down as frauds.”

To expose fake psychics, Houdini employed a small army of undercover agents, calling them “my own secret service.” Rose Mackenberg, a private eye, was his foremost operative.

By her count, Mackenberg investigated more than 300 psychics and seers in the two years she worked for Houdini and many more after that. In a career that lasted decades and led her to testify before Congress, she proved to be quick-witted, adept with disguises and unblinkingly skeptical. Speaking to a reporter for the Hearst newspapers in 1949, she boasted, “I smell a rat before I smell the incense.”

In 1925, for example, Mackenberg visited Charles Gunsolas, a medium in Indianapolis who had described himself in an irate letter to Houdini as “one of the leaders of Spiritualism” in America.

Pretending to be a bereaved mother, Mackenberg told Gunsolas that her baby had died a few months earlier and that she wanted to check on the infant in the afterlife.

Gunsolas claimed to have contact with an 800-year-old Hindu guide in the spirit world as well as with his own “spirit-wife,” as he called her, named Ella. He told Mackenberg that for $25 he could teach her to access the afterlife by gazing into a bowl of water. He then said it would be easier for her to make contact with the Hindu guide if she took off her clothes. She declined.

She reported her findings to Houdini, who arrived in Indianapolis six weeks later to give a performance that Gunsolas attended. Houdini confronted him from the stage, telling the audience about Mackenberg’s experiences. Gunsolas mumbled from his seat that he, too, abhorred fraud, and fled the theater to jeers and catcalls from the audience.

Mackenberg adopted a variety of disguises for the séances, she explained in a 1929 news article, among them the “rustic schoolteacher,” the “credulous servant girl” and the “tipsy consultant.” She used pseudonyms like “Allicia Bunck” (a play on “all is a bunk”) and Frances Raud or F. Raud (for, of course, “fraud”). Often she claimed to be a grieving mother or a bereft widow.

“I never married,” a wry Mackenberg told The St. Louis Post-Dispatch in 1937, “but I have received messages from 1,000 husbands and twice as many children in the world to come. Invariably they told me they were happy where they were, which was not entirely flattering to me.”

She was frequently groped and propositioned by flimflam men, but as Kenneth Silverman wrote in his book “Houdini!!!” (1996), she resisted Houdini’s suggestion that she carry a gun.

In the line of duty, Mackenberg was ordained by so many Spiritualist churches (always for a fee), that her nickname in the Houdini organization was “the Rev.”

Mackenberg’s most newsworthy case came in 1926, when Congress was considering a bill to outlaw fortunetelling in Washington. Public hearings became chaotic as people made competing claims on the validity of divination. Houdini, a star witness, shared the results of his investigations into spiritualism, calling mediums “mental degenerates” and cross-examining professional psychics himself.

Mackenberg, for her part, testified about her recent undercover experiences visiting Jane Coates, a notable Washington medium. In an article included in a 2016 anthology about Mackenberg, compiled by Tony Wolf, she recalled, “It was my testimony, brief and pointed, that touched off the rockets and pinwheels and giant crackers of startled emotion when wrathful persons broke in with protestations and shouts of ‘That’s a lie!’ and ‘We never did such a thing!’”

Her bombshell: She said that Coates had confided to her that the proposed legislation would never be passed because her customers included four senators and because “table tipping séances are held at the White House with President Coolidge and his family.” Coates denied the allegations, The New York Times reported at the time, noting, “Today’s session was unusually disorderly and came near winding up in a free-for-all fist fight.”

Rose Mackenberg was born on July 10, 1892, in Brooklyn to Lewis and Anna Mackenberg, immigrants from Russia. As a young woman she worked as a stenographer in a law office and as a private detective. When a banker asked her to look into a medium who had advised him to invest in a stock that proved worthless, she consulted Houdini, who was already famous for his crusade against psychic swindlers. He advised her on how to uncover the fraud, and then recruited her to join him.

After Houdini died unexpectedly in 1926 at 52, Mackenberg continued their work, taking on clients that had an interest in combating fraud, including police agencies, insurance companies and Better Business Bureaus. She gave lectures on how to spot a phony psychic and revealed the theatrical tricks she had seen hundreds of fake mediums employ in darkened rooms (hidden harmonicas to produce ghostly noises, for example).

She also wrote numerous newspaper and magazine articles on the topic as well as an unpublished autobiography, “So You Want to Attend a Séance?” A 1949 Hearst syndicate article described her as “perhaps the only woman ‘ghost-buster’ in the world.”

Despite a lifetime exposing charlatans, Mackenberg insisted that she wasn’t a nonbeliever in spiritualism and that she was willing to be convinced of the afterlife’s existence. She had just never seen any proof of it, she said.

While Mackenberg never imagined an era in which purported psychics trolled social media for personal details about their marks, she continued ghost-busting long enough to spot trends in the spiritualism trade. She said, for instance, that fakers proliferated when the United States was at war because they offered easy solace to an unsteady nation.

Before Mackenberg died, on April 10, 1968, at 75, she lived for decades in an apartment at 310 West 24th Street in Manhattan. She kept it well lit because, after years of attending séances, as she told the Hearst syndicate in 1949, “I get tired of dark rooms.”